A professional referee training programme is built around match days. There are sessions to prepare for the game itself, but also a lot of attention for recovery. Werner Helsen talks us through a week of training for top match officials. The primary focus is on the next match day, says Werner Helsen. During a tournament like a European Championship he “fills out a sudoku”, he explains. “It’s a mosaic of colours, where the match day is blue”. Thereafter he creates a schedule from matchday minus 4 up to matchday plus 2. “Every day is different, with different types of training, so referees are optimally prepared.

When you’re not familiar with the terms: match day minus one or MD-1 is one day before the game. MD+1 is the day after the game.

The story is originally published on https://www.dutchreferee.com/professional-referee-training-programme/

Start of a match week

On matchday -4 there’s a high-intensity training scheduled. “We combine running at high intensity with taking decisions. Also, for assistant referees we have interesting exercises, in combination with video clips they have to decide upon.” For amateur referees you might not have the opportunity to use a screen with clips, but you can still do exercises with running at high-intensity being the main part of a training session. “This training is one of the most demanding ones.”

What the rest of the week cycle looks like

“Mostly, these MD-1 sessions take place in the stadium. Like the teams, the refereeing team has one hour to train with their colleagues on the pitch where they have their game the next day.”

Werner Helsen proudly shows a picture of him with Felix Brych at Wembley. During Euro 2020, the Belgian UEFA fitness expert couldn’t go to the games because of travel schedules. But the final rounds of the tournament were all in England. “During that session we realized the pitch was hard, so a referee or an AR can pick the right shoes for the game.” 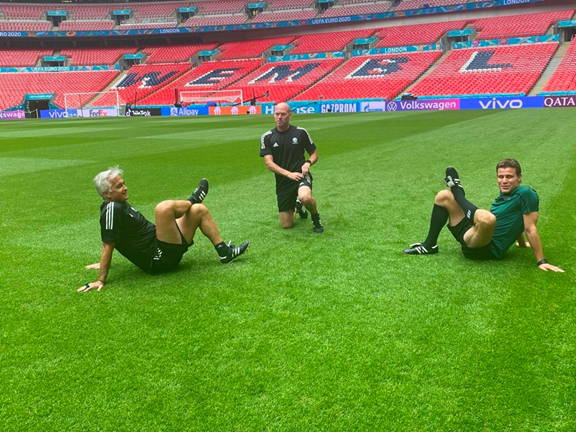 On match day +1 there is recovery training. During tournaments, it’s usually in the hotel and they are adjusted to the travel schedules of referees and where they officiated.

For games in the Champions League or Europa League, referees will adjust their training programme based on the games they officiated during the weekend as well in their own country. During tournaments, they usually don’t have a game within the next few days. Feeling good is important, because it’s an intense period and the referees are away from home for a longer period. That’s why also other training activities are organised, like spinning, strength training, football golf or volley tennis, in particular towards the end of the tournament.

During a European Championship, every referee has a different match schedule, and, consequently, a different training programme. During Euro 2020, there were 5 fitness coaches and 5 physio’s. Plus medical doctors. The referees trained every morning. We started with a warmup and then they followed their own schedule, focusing on the next game.

Referees completed a quick survey on their wellness via an iPad before breakfast and in advance of leaving for the training sessions. Very important at the start of the tournament, as they are in a different environment. “Sleep is very crucial to monitor and to adjust training intensity accordingly.” Besides that, there’s also attention for nutrition and hydration. Hotels are informed beforehand about the essential nutrition in relation to training objectives and match days.

“Refereeing is a school of life! For me that’s not different. I work with pleasure with people who want to improve and that’s definitely the fact with referees. Their work attitude is as high, if not more professional than the players I worked with. They realize as no other how important it is to be (physically) prepared for the international top level.”

Tip how you measure your own recovery

As amateur referee, you can measure how quickly you recover from an exercise: just do an exercise at high-intensity and measure 1 minute after finishing what your heart rate is. You can see it on a smartwatch with a heart rate band or you can measure it by measuring pulse with two fingers in your neck on the right spot.

This box-to-box exercise is for referees. The referee starts near the sidelines, in the extension of the penalty area line. On both sides of the field of play starts 1 person. Both run 75m to he other penalty area in 15seconds and turn back immediately. They end on the penalty mark on the side where they started.

There are giant monitors where they can watch a clip and where they must make a technical and disciplinary decision. 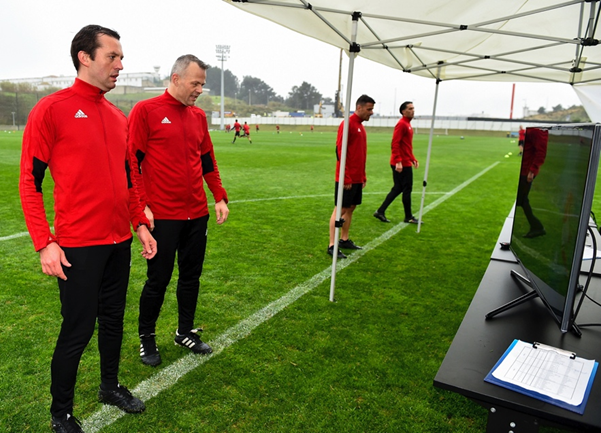 “This type of exercise is not physically challenging, but important for team-decision making. Hereby, both referees and assistant referees have to fulfill their role”.

Referees do a speed and agility exercise on the field of play and move in direction of the penalty area. The assistant referee does the same near the sidelines.

You also need two people to act as players. During Euro 2020, Werner Helsen used the VARs for these exercises. Otherwise, you must change roles when you have a bigger group of referees. These 2 “players” have a different colour training vest, so there’s a clear distinction between the attacker and defender. Besides that, they also carry a white, yellow and red cone with them, corresponding to the card colours. “If one of them moves the cone above the elbow, then the refereeing team should notice this and they have to make the correct decision.”

Both the defender and attacker move in the penalty area in a way to either the referee or the assistant referee can see that they raise the cone. So at least one person in the refereeing team can give input to make the right decision because the view of the other might be blocked.

During a video call Werner Helsen illustrates it with a clip. “You can clearly hear that the assistant referee makes the call “penalty red card, penalty red card”, after which the referee shows the red card.

“In some cases, it’s impossible for one of the officials to notice it, so teamwork is very important”. 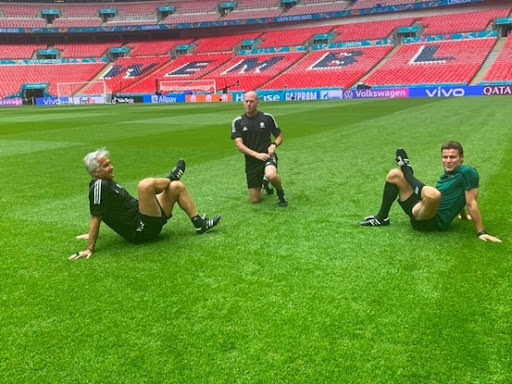